The data on the searchable portion of this website comes from the Minnesota Sentencing Guidelines Commission (MSGC) and was obtained through a freedom of information request.

PROTECT asked the MSGC for data on all convictions for three broad categories of sex crimes in all 87 Minnesota counties for the years 2007-2016 (inclusive). The crimes covered by our data request are detailed below.

In response to our request, the MSGC provided detailed data on a total of 6,864 felony convictions, representing cases sentenced during the decade reviewed (2007-2016).

In order to more closely reflect decision-making during a given prosecutor’s actual time in office, we decided to examine those cases with a conviction date during this time period. We removed a total of 175 cases with conviction dates prior to 2007 from this data set, leaving a total of 6,689 cases.

Selected information from these 6,689 cases can be seen by using the “View Case Data” button on each results page. We have removed some data fields (including offender name and date of birth) to avoid identifying individual offenders, which is not the purpose of this website.

The MSGC obtains its data directly from the courts, or the Minnesota Judicial Branch (MJB). The two agencies use different definitions of “most serious offense” (see below). We chose to use the MSGC data because the MSGC adds a great deal of additional information on sentencing and demographics and because of its “offender-based” approach (see below).

We have supplemented the MSGC data with data on stays of adjudication from the MJB. To avoid conflating slightly different data sets, the MJB data is included in a table in the “More Info” section and not on the automated search and results pages of this website.

Crimes Included In This Data

Our data request to the MSGC included 16 different offenses, which we have grouped into three distinct crime types:

Below is the table of offenses provided by PROTECT to the MSGC in our request. More detail (including links to the statutes) on each of these crimes can be found in the “About the Crimes Covered On This Site” section.

The three crime type groupings reflect the crime type categories on this website’s search menus and specifically encompass the following: 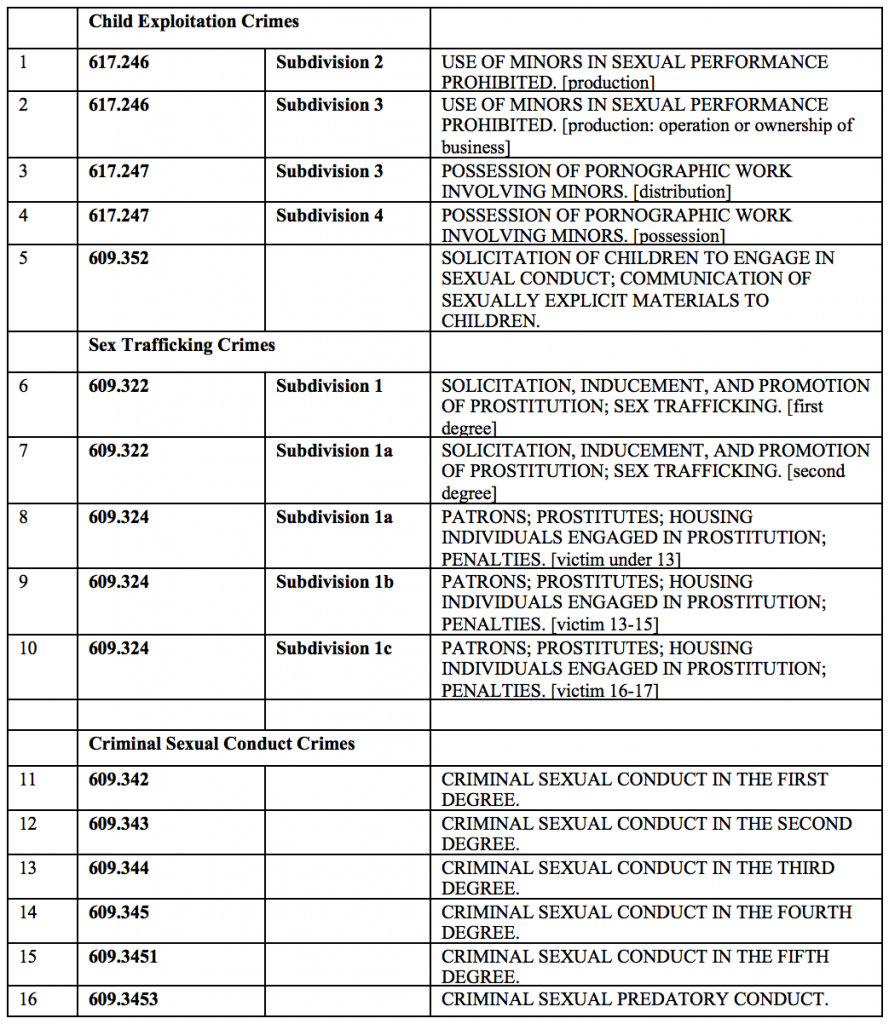 The MSGC describes its data gathering and analysis as follows:

It is important to note that, as indicated in the excerpt above, the data on this website is “offender-based” using the MSGC’s determination of “most serious offense sentenced.” If an offender was prosecuted for multiple crimes or charges, he or she will only appear once, under that most serious offense. “Repeat offenders,” prosecuted months or years apart for separate sets of crimes, will appear more than once.

The MSGC defines “most serious offense charged” through a calculation of “severity level” and “criminal history score.” We have used the Commission’s definition.

The convictions covered by this website are only for those crimes where the “most serious offense sentenced” is listed in the table above. If an offender was charged with Criminal Sexual Conduct and Aggravated Robbery, for example, but only found guilty of robbery, he or she is not included in this data. If an offender was charged with Murder and Criminal Sexual Conduct and convicted of both, the most serious offense would be murder, and he or she would not be included in this data either.

Two counties in our data set, Hennepin and Olmstead, had one case each where the offender was not given a sentence to state prison, but also did not receive a stay of execution or imposition. This appears to be the result of a durational departure to a misdemeanor sentence and resulted in the the sum of the breakdowns of “Type of Probation Given” on the Sentences page being less than 1% short of 100%.

Population And Per Capita Conviction Rates

Data on county population was obtained from the Minnesota Department of Administration’s Minnesota State Demographic Center for 2016, the most recent year covered by this website. County conviction rates were calculated on a per capita basis, reflecting convictions per 1,000 persons over the entire ten-year period.

Historical information on elected county attorneys was obtained using data from the Minnesota Secretary of State’s website, which provides data on county elections by year. Information on current county attorneys was compared against individual county websites. A small number of past county attorneys may be missing, if they were interim appointments made to fill vacancies between elections or were elected for the first time in November 2018. Photos were obtained, whenever possible, from websites, news reports, campaign sites, and the Minnesota County Attorneys Association website.